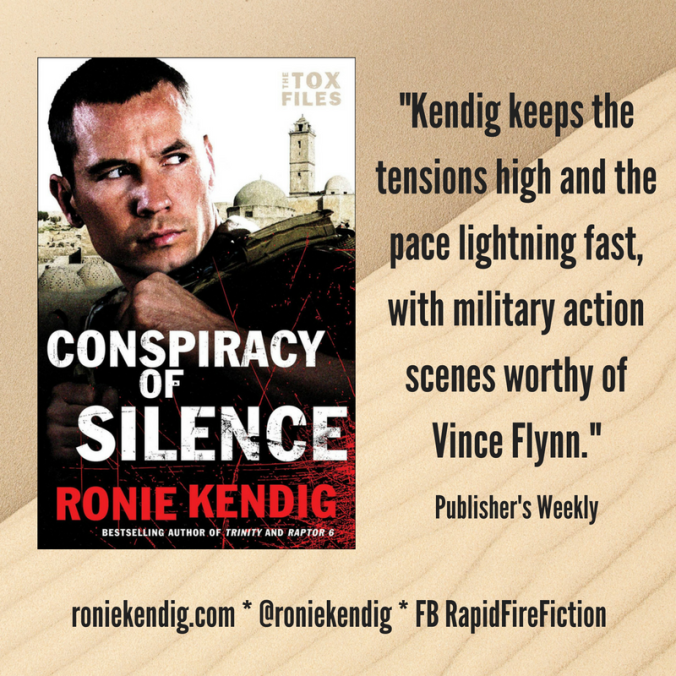 Ronie Kendig’s new series, The Tox Files, is described as “one part Indiana Jones, one part Dan Brown, and a whole lot of Ronie’s Rapid-Fire Fiction!” To be honest, I don’t know who Dan Brown is. Hmmm, that’s probably not something I should admit. However, I like Indiana Jones so I was intrigued.

When I learned that the story was a military mission involving ancient history, an age-old plague, and the world of archaeology, I knew it was a book for me. When I found out that I could apply to be on Ronie Kendig’s Conspiracy of Silence Influencers Team, I applied immediately.

I was approved to join this elite team of influencers, and eagerly awaited the delivery of my book. It’s really fun to read a book before it’s released to the general public and I was excited to get my grubby little hands on it!

Little did I know that before I received the book I would trip and fall in my driveway and get a horrible concussion that took months to recover from. I couldn’t read or write for about five months. Even now I still experience occasional symptoms and it takes me longer to read than before.

I’m happy to say I was finally able to read the book and I’m pleased to offer my very tardy, but sincere, review of Conspiracy of Silence. I liked this book immediately. The short prologue jumps into the pages of Biblical history with a scene from 1440BC. Chapter one begins with a heading that says “Ten Days Ago.” (Reader hint: when the chapters are marked by days, or hours, you know it’s going to be a fast-paced read with lots of action!)

I was familiar with the characters already because I had read the free novella The Warrior’s Seal. Not only is this an excellent read, it will give you insider information when you read Conspiracy of Silence. It’s a full novella and quite a story to be given away for free. Thanks Ronie!

I knew from the start that I would enjoy this book. When I got about a quarter of the way in, that knowledge was solidified with one sentence.

“On the Black Hawk inbound for the archaeological site, Tox glanced at Ram. His friend bore the concern Tox expected to see about his sister. Comms piece snug in his ear, Ram stretched his neck and adjusted his HK416.”

If you know me at all, you know that I’m an HK girl; I shoot an HKVP9. I think this is the first time I have ever read a book that referenced a gun produced by German manufacturer Heckler & Koch.

The author did her research and although she used many of the weaponry that is common in books, she went beyond the predictable to the extraordinary. This is how I knew the rest of the book was worth the read. 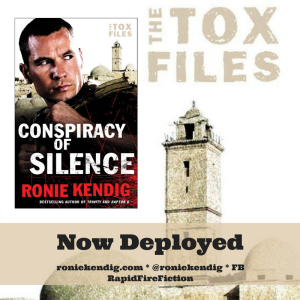 Conspiracy of Silence did not disappoint and would be equally enjoyed by men or women. The characters are realistic and easy to relate to. The true-to-life romance doesn’t take over the story line. There are more than enough fight scenes to entertain those with a love for action and each scene moves the story along, creating the tension and suspense we all love.

The archeological aspects and tie-in to Biblical history were fascinating. I love being tricked into learning history through a fiction book! There are so many details that play into the story, but the science and history, often presented through dialogue, doesn’t feel forced or slow the pace of the story.

I honestly didn’t know who the author was going to kill off in this book and that makes for a great read. Unpredictable and full of twists and turns, Conspiracy of Silence makes you wonder what trouble the characters could possibly get themselves into next.

I highly recommend this read, but if you’re still hesitant, download The Warrior’s Seal for free. What have you got to lose? The second book in The Tox Files, or third if you count the prequel, comes out on September 5th. You have plenty of time to get caught up before Crown of Souls releases!

*I was provided a copy of Conspiracy of Silence by the publisher in exchange for my honest review. All opinions in this review are my own.