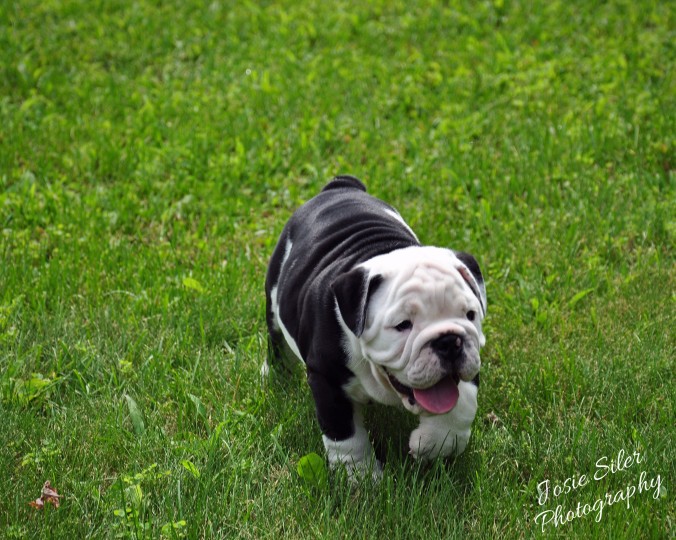 Meet Harley James. Harley was an adorable English Bulldog puppy who has grown into quite a handsome big boy. This was his first homecoming, and there’s a secret behind that smirk on his face.

It had been almost a year since our family’s bulldog Quigley had passed away. We missed him so much, but were ready for a new bundle of cuddly fur in the family. When we met Harley, it was love at first sight. He was soft, cuddly, and highly entertaining with a the most beautiful coloring and entertaining little wiggle when he walked.

We waited impatiently until it was time to bring him home. My parents went to pick him up and my brother and I headed to my parent’s house as soon as they got home. Before going in the house we all played with him in the yard and gave him a chance to explore.

The first thing we discovered is that Harley loves, I mean, absolutely loves, belly rubs. Apparently his mamma Jewel was like that too; it must run in the family. Harley would come up to you and flop right over, kicking his little legs and waiting for that glorious belly rub. Of course we were happy to indulge our new little friend.

Between belly rubs Harley would wander the yard, picking up sticks twice his size and sniffing everything in sight. I love this photograph of Harley exploring the yard. But do you want to know a secret? There’s something I edited out of the photograph. That pleased, smug, happy look on Harley’s face? It’s there because he had just made a large poo in the yard and was smugly walking away from his work, proud of a job well done.

No matter, it’s still one of the cutest photos I have of Harley and a great memory of a wonderful dog. Harley isn’t with us anymore. Due to health issues in the family Harley is now at a new forever home where he has the company of other dogs and the love of a new family.

Harley has made so many people happy in his life so far and I’m so blessed that he got to be with our family for a little while. I’ll love him forever!

Until we meet again,

This site uses Akismet to reduce spam. Learn how your comment data is processed.